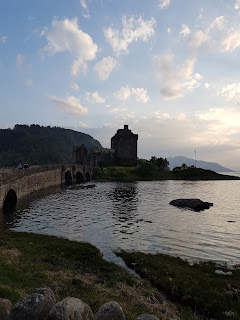 Originally it was the intention to start at Dornie, to see the Eilean Donan castle. However, it turned out that my route would be reduced by about six road miles from Shiel Bridge (Morvich). I stayed at Dornie, saw the castle, and got the bus to Shiel Bridge to sign out around 9:15am. Eilean Donan - a 13th century castle - quite impressive against the backdrop of  Loch Alsh. I met a few seasoned challengers on the road to Glen Affric; some passed while I was standing on the side of the road looking at my mobile (perhaps they thought I was lost already?). There was a guy, wearing shorts, who told me a bit about his previous challenges and that the most important thing is to be "adaptable". Wise words, I later reflected. A couple road miles to get to the Affric Kintail Way / Glen Affric. The weather was quite sunny for most of the day and suncream was neglected - this mistake became apparent on days 2-3. However, the sun did allow some wonderful views of the glen.
Post a Comment
Read more 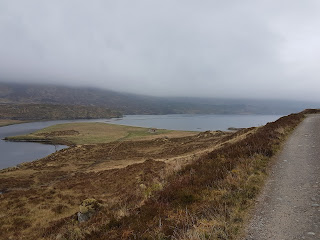 Taking on some Munros (Sail Chaorainn, Sgurr nan Conbhairean and Carn Ghluasaid) was the plan for this day, before finally ending up next to Loch Cluanie. Unfortunately a weather front had arrived and I couldn't see any of the tops. Given this was my first challenge, I decided to go for the FWA through Cougie. I walked for a while with Rod along the side of the river. However, we eventually got a bit lost due to the poor signage and missing footpaths surrounding the hydro-electric power development site near the head of Loch Affric. We cut across a boggy field with no path (although there was a signpost, "To Cougie Lodge") before we bumped into Donna B. (?), Ian Harbert, Barbara Sanders, a younger couple (David and Aleks.?) and an older gentleman, who were also debating where the path was. Eventually we discovered it well hidden, leading steeply up from an access road before reaching the older track. Path alongside head of Loch Affric. Getting to Cougie was fairl
Post a Comment
Read more 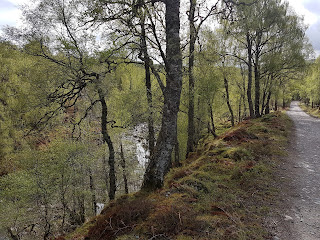 After having successfully broken camp and washed in the river, I managed to experience a river-based-water-refilling accident resulting in partial submersion; my fleece was a bit soaked and I got some water in my boots. Fortunately, my phone is waterproof. I was glad for a bit of sun that morning, which meant things dried out fairly quickly. It was also at around this point that I discovered a leak in my collapsible Nalgene canteen. Not sure how it happened but possibly it was sat on, in my tent. Rather foolishly, I ended up throwing it in a bin later on in the trip. As a personal note, I might bring Duck Tape next time - it would probably have dealt with the leak. My hard Nalgene was used throughout the rest of the trip - a capacity of 1L of water appears to be sufficient. I didn't see anyone following the road out from River Doe but I did go over a deer fence that said "Deer Farm - Please Shut the Gate". Eventually the road led through Ceannacroc Lodge and there wer
Post a Comment
Read more 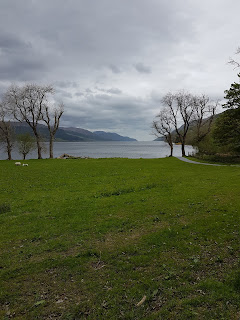 I appreciated the chance to sleep in a proper bed and watch some TV in the Holt B&B that night (I know - a proper backpacker would use a camp site). I met a friendly couple (Robert and Becky?) there and saw them on their way out the next day in town. This was the first "low" day I had and it felt difficult, especially late-on. The walk up along the track near General Wade's Military Road towards Whitebridge was quite steep and a bit tedious. This was broken, briefly by some nice views of Loch Ness. View of Loch Ness from outside Fort Augustus Path alongside General Wade's Military Road Slightly depressingly, the roadside track ended up in a wind farm development site. It was at this point I remembered I should have phoned in the night before (how I managed to forget, I don't know). From there, I took the old road northeast, past the barren Loch Tarff area, to a high point along the side of Carn an t-Suidhe, where it was extremely windy. Just about
Post a Comment
Read more 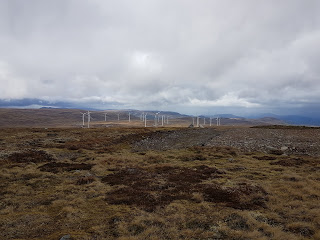 I felt fairly OK after waking up near the weir and packing up my tent. The weather was still a bit breezy and overcast but I made reasonable progress through the remaining parts of the wind farm. View of wind farm along track Going past Carn a Saobhaidhe along the Allt a' Ghille, I did eventually find the "lunch hut" about 3km from my overnight camp. Had I known where it was, I think I would have made the effort - it was quite clean inside and plenty of space. After a bit of clomping through a boggy area, I found the Allt Odhar where it intersected with some smaller burns. Quite a nice spot for a break. Following the Allt Odhar east After what seemed like quite a long time, using the hare tracks alongside the river, I eventually met with the track which lead past the newer Coignafearn Lodge building after a mile or two. Following this northeast an extra two miles, alongside the Findhorn river, led me to the older lodge; a courtyard-shaped building, which a
1 comment
Read more 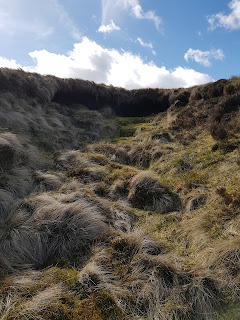 I was glad that the wind had calmed down that morning and it was fairly sunny. The first part of the journey required crossing the Allt a' Mhuilinn. I eventually figured out that I had to go through a gate, and alongside the river to the north for a while before it became possible to ford it. This lead to a hidden path on the opposide side, going south, which went back past the gate (now on the opposite side). Following the track for a few kilometres was possible, despite it not being marked on the OS maps. Possibly I could have followed it all the way to Red Roof Bothy but I was not sure. I decided to stick to the plan and followed a dried-out river bed up the side of Carn Caol. My route up on to Carn Caol Some cracked egg shells and rabbit/hare droppings on a rock near the top. After climbing a considerable amount over rough ground to reach a track, which then descended for a while and then went northeast, on the level, I eventually reached Red Roof Bothy. The ins
Post a Comment
Read more 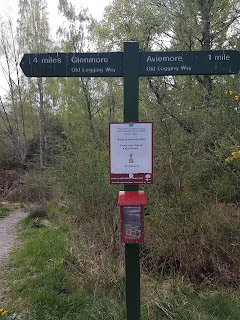 The weather forecast was good for the next couple of days, so I went on the planned route through Ben Macdui. However, this was a three day route and Day 7 was a scheduled "rest" day; I walked just six miles from Aviemore to Glenmore Camp and Caravan site, along the Old Logging Way; quite an easy walk. I didn't see any challengers that day but there were a number of single-person tents in the camp site. On the Old Logging Way to Glenmore camp and caravan site. A pleasant view of Loch Morlich. When cars weren't driving by, it was a very tranquil setting in the low winds and evening sun. I had some fish and chips in the Glenmore SYHA. Also the Caingorm Gold they sold there tasted good.
Post a Comment
Read more
More posts